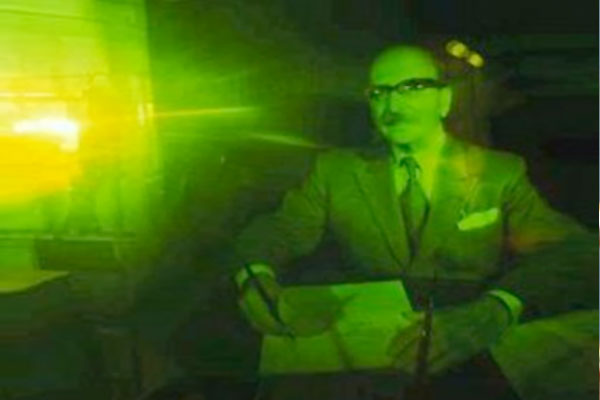 Holography was invented in 1948 by Hungarian scientist Dennis Gabor, who won a Nobel Prize for his work.

The concepts of the hologram were discovered by mistake all the way back in 1948. A Hungarian scientist, Dennis Gabor, was working on a project to improve the quality of electron microscope imagery, when he stumbled across the idea. It wasn’t until the invention of a suitable light source for holography, notably the laser, in 1960, that scientists were able to produce holograms that were more than tiny transparencies no bigger than a postage stamp.

From 1960 onwards, holography grew rapidly, both in fields of display and scientific imagery. Two scientists working in a lab at the University of Michigan, Emmett Leith and Juris Upatnieks, developed the basics of the Reflection hologram as we know it today. Meanwhile, in the Soviet Union, Yuri Denisyuk, who was also working on optical holography, invented another type of hologram which is also still in use.

People became interested in holography as a creative medium in the mid to late 60’s, with focal points developing in San Francisco, New York and London. Leith and Upatnieks as well as a scientist called Stephen Benton all developed processes for making holograms that were viewable using ordinary white light. Art holography was born.

A revolutionary technique for mass producing holograms cheaply and in very large numbers was developed in the mid 1970’s. Known as the embossed hologram, this is the type of holography most of us are familiar with, seen on credit cards and bank notes.

For more information on holography we recommend that you visit:

This hologram was created in 1964 by Emmett Leith and Juris Upatnieks at the University of Michigan, only four years after the invention of the laser.
Scroll to top